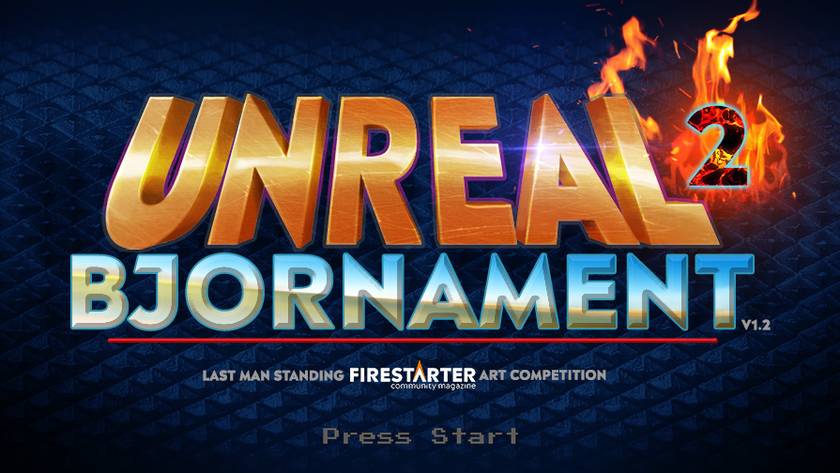 I am starting another edition of the very successful art competition Unreal Bjornament this year named Unreal Bjornament 2. It is a knock-out, last man standing style art competition where artists are randomly paired up and fight against each other to remain in the fight for supremacy. The loser is knocked out and placed in the “comeback bracket” where they have one more chance to fight their way back to the competition and become the last man standing in the finale.

The idea of the competition comes from many years ago from a forum (which we all know and love) www.conceptart.org. On the forums was a user who's name is Cody Tilson and he was the original creator of it and it went by the name Last Man Standing. This was around the year 2004 and it was a huge success with a lot of artists of varying skillsets joining in. What was really fun about that was the random pairing and not knowing who you'd go up against until they announced the topic.

I remember fondly sitting there, waiting for them to announce it and sweating bullets, worrying if I'd be paired up again random-person-joe or a monster like Marko Djurdjević (six more vodka).

Regardless of who I'd go up against I knew I would do my very best and try to destroy my opponent.

Last year I asked Cody of it was 'ok' to reintroduce the Last Man Standing, or at least be heavily inspired by it, and he gracefully agreed on it and he was even one of the judges last year. There is something to be said about applying all your knowledge and effort into one single illustration, especially when it is in a competitive situation. I have found out that you try a lot harder knowing that there is something on the line. I decided to start this competition because in our community of artists there is a lot of behavior centered around being a lone-wolf and very little feedback to themselves and others or friendly competitions. Mostly we hear about the nasty, behind the back, rumors or bloated egos thinking they are the bees-niece. What better way to correct that by putting them head to head and having them fight it out?

Last year in Unreal Bjornament (some seen here: http://www.30minwarmup.com/?s=bjornament) there were 45 artist of varying skillsets, from students, amateurs, to working professionals fighting it out over a time span of 5 months. The amount of progression all the artists made was utterly astounding, it was truly amazing seeing them fight for their place in the competition and push eachother on creating better and better art each round. When the dust settled and we all emerged from the chaos of the competition and looked back and round 1 entries it almost didn't look like the same artists.

If it feels like something you'd be interested in please head over to the forums, create and account and signup for the competition! Hurry up as the deadline for the signup is March 1st, which is the announcement of the random pairings and the first topic!