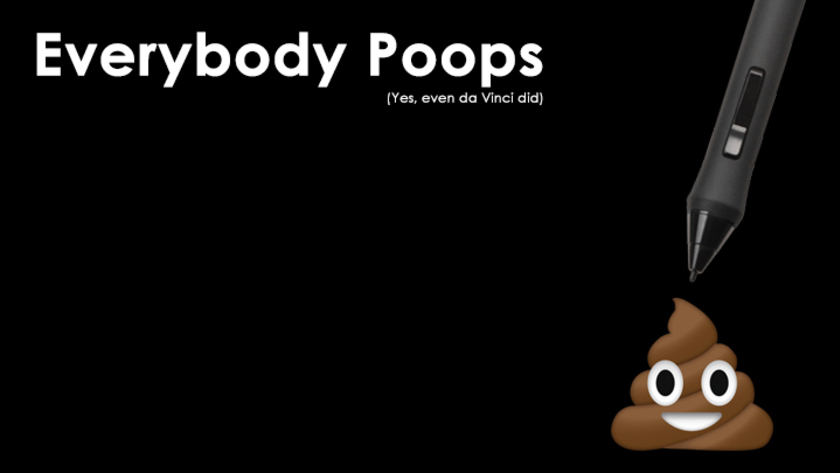 When speaking with fellow creatives at work or at conventions, there's a particular conversation segment that seems to come back often. Picture a group of people either looking at some art or talking about a specific artist and someone will usually say "This artist makes me mad, he or she makes me feel like my work is garbage. Like I AM garbage." Rings a bell? Now I've personally been looking up to what some people may call "Art Heroes". By that term I mean, people who are just fantastic at what they do in the creative line of work. People who seem to have exquisite taste, outstanding technical execution and juggernaut productivity. You can find such individuals in all fields obviously and art/tech simply happens to be the one we'll be discussing here.

In my eyes, these people have always symbolized what I should aim for, what I should compare myself to. Godly archetypes of traits I should strive to acquire if I want to be "any good" at what I do. I've studied their work, listened to their interviews, followed their tutorials and most of all, dreamed that someday they would become my mentors and elevate me to their standards so that I can finally look at myself in the mirror and say: "I'm good enough."

With that goal in mind, I started ramping up the amount of time I would invest into my craft. I personally give very little credit to talent which made the equation very simple. More work and smarter work equals to better results. Therefore, I read a lot of books on productivity and discipline and began working more, much more. Some weeks I would hit the eighty hours mark and I would in general never go below sixty. The quality of my work improved at a much faster pace but something else, something much darker started to grow. I became moodier and more intolerant, would pay poor attention to my health, socialized a lot less and shared fewer moments with my girlfriend. In short, as I was trying to replicate my Heroes’ success, things gradually fell apart.

As this issue started to weight a lot more on my enjoyment of the day to day, I decided to tone it down, resigning myself to the idea that I’ll never be as good as my Heroes. That was it, I couldn’t “take it”, I wasn’t resilient enough. My girlfriend stepped in and suggested that I took a more global look at my life. On her advice, I observed that I had a decent job, a fairly healthy body, some exciting hobbies, a great social circle and more than anything, a fantastic relationship with her. Well maybe I couldn’t be an Art Hero myself but things were objectively pretty good. Still, a part of me that I refused to acknowledge was left frustrated and still held the Hero status above everything else.

It turns out that, in the last year or so, I've been fortunate enough to actually meet and/or work with some of my Heroes. There was THU, Industry Workshops, there's been "at work" stuff and also freelance opportunities. Now if you're a beginner reading this you're probably thinking "How cool?!" right? I mean how awesome must it be to get somewhat close to some of the people who are at the pinnacle of our field, poke their brains and finally ask them what brush they are using?

Well... This is where the magic stopped.

I was crushed to discover that several of my Heroes had highly unbalanced lives. For all their creative/professional successes, they suffered from some of the similar symptoms I went through myself when pushing really hard. Social lives adrift, health deteriorating prematurely, toxic mindset, the list goes on. It was sincerely disheartening and I had to sit down in order to process this information. Was this the price to pay? Was it necessary to reach for the stars? After all the math is the same for everyone isn't it? Every day, you wake up with a bank account containing 24 hours and it's flushed at midnight. Then you get credited 24 new hours and the ones you misused or didn't use the previous day are gone forever.

One thing I learned is we tend to look at these Heroes and compare ourselves only to the facet of them that is successful. It's made even easier with social media where people can simply show the glorious side of their lives while keeping the rest (90%) in the shadows. I wouldn't say there is any malicious intent here but that if given the choice, people will only expose the positive aspects of themselves. No one wants to display what's dysfunctional about their lives. It turns out that nothing is magical or free and that quite often the price to pay is a heavy one. Is it worth it? That's for each and every one to decide obviously. As far as I'm concerned, I've accepted that I'll only grow at a certain pace and that I won't reach level 4571481 (whatever that means) at age 30 but maybe only at 35, even though some kid will get there by his early twenties. And that's totally fine. It's even great if I manage to keep the rest in balance and enjoy a rich life. There will still be necessary sacrifices on the altar of growth but that's only a logical process in a world where we're all limited by one resource: time. I simply decided that I would sacrifice the right amount. I also accepted that this "right amount" is different for everyone and that this is something to be respected.

Another couple of anecdotes were the last nail in the coffin. While I still felt like my work level was poor, I started receiving emails from artists asking for advice. Roughly around the same time, some people started walking up to me at conventions, knowing my name and my work and saying they were fans. This hit me like a punch in the stomach and I lost my breath on the spot. Was I being pranked or did these artists seriously have no clue? I’m garbage remember! Similarly, I had long chats on the subject with some of my Art Heroes and two of them in particular confessed that they considered themselves as beginners that have yet to “get good”. These moments revealed to me that there is an infinitely high pyramid of skill and that, as soon as you start climbing it, there will be many people below that will look up to you. That pyramid being endless, there is no getting “good enough” and finding the right amount of work, as well as adopting a healthy mindset towards it, is the only and best thing you can aspire to.

These last few years, I've pushed really hard on the work side and played dangerously with my health and the patience of loved ones. Now don't get me wrong, I do hold hard work in high esteem. However, I've discovered that working too hard is equally a very real thing to watch out for. There is one concept that helped me find the right amount of hard work. Rather than comparing myself to someone else, I started comparing myself to who I was a couple of months back, and a couple of years back. When I saw good progress, I gave myself a pat on the back regardless of how far I was from my Art Heroes. It made it ok to just be an artist "on his way" while making sure that I didn't abandon my dreams nor my sanity. I actually started to enjoy the process a lot more because suddenly, the love of the craft had been found again and replaced the obsession of chasing an image of someone that doesn't exist.

The takeaway here is that we tend to set unrealistic targets for ourselves rather than focusing on what we could actually improve today. I highly encourage you to experiment and find your sweet spot when it comes to the number of work hours that is sufficient for you to observe and enjoy growth while still leaving enough free time to allow you to breathe. Go too far and see for yourself that it doesn’t work. Be lazy and observe you progress halting all of a sudden. Be on a quest to narrow down your ideal work ethic! Keep in mind that this "right amount" of work hours will vary along the years and that not feeling crushed by other's success is also a constant learning. You're simply going to get better at noticing these cycles and navigating through them with increasing serenity.

In conclusion, this article is about celebrating your journey and seeing Art Heroes not as goals but as inspirations. If ever you feel pain, when looking at someone else's work and successes, remember that no one was born a master and that it is simply up to you to stay on the path long enough while making sure that you keep your life in check. In the end, maybe there aren't any heroes and we're just all at our respective stages of our journeys. In the end, everybody poops.

Very deep. If you want you can actually consider this a general rule of thumb for nearly everything and every profession. Do you envy those rockstars? The last superhero movie actor or actress? (Specifically the actress, with all those weinsteins walking around...) Or what about bank managers, politicians, royal family members and other VIP´s? What about all those influences and wannabee Instagram 1-hour-fame people? Do you see their 23 hours outside the glam light? Do you see them poo?

As said - very deep and well thought out advise. Consider this and take the most out of YOUR life. With YOUR pace, abilities, hobbies, friends and family needs. Or just the need of being lazy, looking for hours snow falling or fish jumping. Whatever. Live Your Life. Profession, money, fame - they are just one minute part of it.

Thank you for sharing this. It is something I was thinking lately and its good to see the perspective of someone else.

Perfect synthesis of a growing disease. I did this work on me this last year through discussions with my colleagues, my virtual meetings with great concept artists and a good discussion with myself (which I continue with pleasure today). I keep in mind that we must not forget that it is pleasure and passion that lead us.
Thank you for this "focus".